Thanksgiving is in a few days, and I want to take this opportunity to wish everyone a very Happy Turkey Day! I also want to take a moment to thank each of you- my readers and clients- for reading my blog each week and for allowing me to help you and your own clients resolve their disputes. Without you, I would not be a blogger and a mediator who is extremely happy with my full time profession! THANK YOU!

While Thanksgiving is a time to give thanks and look upon our blessings with gratitude (It actually started out as a religious holiday!), it is also a time to eat quite a lot- (overindulge?) and have fun. Thus, I would like to share with you some fun facts about our day of Turkey brought to us by:

For example; the first Thanksgiving  (held in 1621) did not last merely one day, but in fact, lasted three days (Think of the indigestion—and they did not have Tums or Rolaids!) shared by about 50 colonists and 90 Native Americans (from the Wampanoag tribe). Of the colonists- five were women, and they were the ones who served the meal (Nothing has changed!). It also did NOT include what we usually have today- turkey (from the Hebrew word “Tukki” meaning “Big Bird or Pheasant Bird”)  mashed potatoes, pumpkin pie or cranberries, but rather consisted of deer, rabbit, and squash and perhaps a fowl other than turkey.  What is more- they did not eat this three day feast with forks as this utensil had not been invented!

Speaking of pumpkin pie, the largest pumpkin pie ever baked was 12 feet in diameter weighing slightly more than a ton. To make it, the cooks used 900 pounds of pumpkin, 1,860 eggs, 300 pounds of sugar, and 250 pounds of crust. (I wonder how many calories was in the whole pie?)

…And the average size turkey that graces our tables weighs 15 pounds, consisting of 70% white meat and 30% dark meat! In 2007, we ate 46 million turkeys on Turkey Day! (Which is about 20% of the turkeys we consume each year.) Minnesota raises most of these turkeys (47 million each year) while Wisconsin raises most of the cranberries. (To determine if cranberries are NOT over ripe they must bounce four inches high before being harvested and sold!) Illinois raises the most pumpkins, and North Carolina raises the most sweet potatoes!  Typically, by the time we finish eating all of these goodies, (aka Thanksgiving dinner), we have consumed about 4,500 calories! Or, at least it feels like it!

In 1953, there was approximately 260 tons of frozen turkey left over from Thanksgiving. As a result, Swanson came up with the idea of frozen T. V. dinners. (Talk about over estimating demand!) It sold for 98 cents and consisted of turkey, cornbread stuffing, frozen peas and sweet potatoes

Thanksgiving did not become a national holiday until President Lincoln declared it as such in 1863.  It was in 1939 though that President Franklin D. Roosevelt moved Thanksgiving to the third Thursday of the month. He did so to improve the shopping spree we all go on for Christmas. As it was during the Depression, any sort of economic stimulus was very much needed. However, no one liked this idea and so the President was forced to move it back to the last Thursday in November two years  later. (I do not think the economy has suffered though as a result!). Franklin D. Roosevelt also legalized it as a national holiday.

While Thanksgiving is a holiday for most of us, it was the day of doom for the turkey! It was President George H. Bush- No. 43- that first formally pardoned the turkey in 1989. For the next sixteen years, each year the spared turkeys  were sent to Frying Pan Park in Herndon, Va where they lived peacefully in retirement. From 2005 until  2009- the spared birds went to Disneyland and Walt Disney World where they were the grand marshals of Disney’s Thanksgiving parade.  Since then the spared turkeys have retired to Mount Vernon or to Turkey Hill Farm in nearby Leesburg, Virginia.

What about dancing? The turkey trot was not created until early 1900’s. It became popular in the 1920’s. It is indeed modeled after the turkey’s actual walk- a short 2 step jerky affair!

At about the time that the turkey trot was in vogue, Mr. Macy started his Macy’s parade- in 1924- with 400 employees marching through the streets to celebrate the Christmas season and drawing 250,000 people to watch it…   Real animals from the Central Park Zoo took part.  Three years later- in 1927, the helium balloons were added. The first balloon animal in the parade was Felix the Cat. (It was actually Gimbels that held the first Thanksgiving parade!)

And what about football? The first football game on Thanksgiving occurred in 1934- the ‘Thanksgiving Classic” when the Chicago Bears beat the Detroit Lions. The Lions have played every Thanksgiving since then except during World War II.

… And Thanksgiving   became “universal” (pun intended) when Neil Armstrong and Buzz Aldrin ate their own turkey dinner with all of the trimmings as their first meal on the moon! 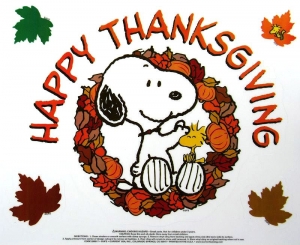 … Just something to think about!