Mediations are supposed to be confidential… but are they really? 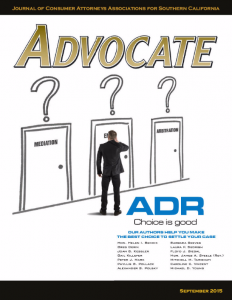 Previously published in the September 2015 issue of “Advocate” Magazine, Pages 44-55

The September 2015 issue of  Advocate (Journal of Consumer Attorneys Associations for Southern California) focuses  on ADR-Choice is Good.  I am privileged to contribute an article on mediation confidentiality and re-print it here. It may be found at pages 44-55 of this issue.

Mediations are supposed to be confidential… but are they really?

While honored in theory, mediation confidentiality may not be so in reality!

But, are mediations really confidential? While in theory, they are supposed to be, in court proceedings, they are not always so. Although a review of both federal and state statutes and case law indicates that mediation confidentiality is to be strictly construed and applied, in practice, this does not always occur.

California Evidence Code sections 1115-1128, inclusive, govern not only mediation but also “mediation consultations” (“…a communication between a person and a mediator for the purpose of initiating, considering, or reconvening a mediation or retaining a mediator.”).

The core rule is set out in Evidence Code section 1119 which provides three different protections, all of which are to occur “… for the purpose of, in the course of, or pursuant to, a mediation or mediation consultation.” Subsection (a) provides that “no evidence, or anything said or any admission…” (i.e., oral communications) is admissible or discoverable while subsection (b) provides that “…no writing” is admissible or discoverable. Subsection (c) though is much broader by providing that “… all communications, negotiations or settlement discussions by and between the participants in the course of mediation or a mediation consultation shall remain confidential.” Thus, by this section alone, not only are oral and written communications inadmissible and not discoverable, they are also confidential.

Unless waived, this confidentiality lasts forever.  Section 1126 of the Evidence Code provides that inadmissibility and confidentiality remain “… to the same extent after the mediation ends.” No time limit is given.  To the extent that a “… reference is made to mediation during a subsequent trial…” it shall be deemed an irregularity in the proceedings and a ground for a new trial under Code of Civil Procedure Section 657. If the reference is made during a noncriminal proceeding, it will be grounds to vacate or modify the decision in whole or in part.  (Id.)

To waive mediation confidentiality, all parties- both the participants and the mediator- must do so orally or in writing. (Evidence Code sections 1122 and 1124.) And, to have any settlement agreement admitted into evidence, it must contain the “magic words” that it is “admissible, or subject to disclosure” or “enforceable or binding” or “words to that effect.” (Evidence Code Section 1123.)

The California Supreme Court has broadly interpreted these statutes to the point of being a “near categorical prohibition against judicially crafted exceptions to mediation confidentiality.” (Amis v Greenberg Traurig, LLP, California Court of Appeal, Second Appellate District, (Case No. B248447, issued March 18, 2015) slip opinion at 2.) Starting with Foxgate Homeowners’ Association v Bramalea California, Inc. (2001) 26 Cal. 4th 1, 108 Cal. Rptr. 2d 642, the Court held that mediation confidentiality precluded a party from seeking sanctions against opposing counsel on the grounds that the latter did not attend the mediation in good faith thereby causing the moving party to incur approximately $24,000 in mediator and expert fees. Ruling that an exception to mediation confidentiality cannot be created to punish bad faith participation in mediation, the Supreme Court stated:

We do not agree with the Court of Appeal that there is any need for judicial construction of sections 1119 and 1121 or that a judicially crafted exception to the confidentiality of mediation they mandate is necessary either to carry out the purpose for which they were enacted or to avoid an absurd result. The statutes are clear.  (Id. at 652-3.)

Three years later in Rojas v Superior Court (2004) 33 Cal. 4th 407, 15 Cal. Rptr. 643, the  Court once again refused to allow plaintiffs to obtain evidence during discovery that had been “… prepared for the purpose of, in the course of, or pursuant to, a mediation…” even though the plaintiffs had no other means of obtaining the crucial evidence. Again, the Court refused to create a judicially crafted exception for “good cause” to mediation confidentiality, noting that there is no “absurd result” to be avoided here. (Id. at 15 Cal. Rptr. at 655-656.)

In Fair v Bakhtiari  (2006) 40 Cal. 4th 189, 51 Cal. Rptr. 3d 871, the Court again held that mediation confidentiality precluded the admission of a memorandum of understanding in a motion to enforce the settlement memorandum  because it did not contain the “magic words” of being binding, enforceable, admissible or words to that effect as required in Evidence Code Section 1123.